Posted by Chris in Uncategorized on December 3, 2011

Recently I stumbled across a pdf file of the rules for the Dust Tactics board game online. I duly printed it out  and read it in snatches on the bus over the next few weeks.

A point of caution I would make is that I’m fairly sure that the rules I read are the first edition of the rules, not the rules from the recently released Revised Core Set. But I don’t imagine that there would be such a huge difference between the old and new sets.

I was struck by how clear and simple the rules are. Of course it is a board game rather than a full fledged wargame so it’s inevitable that things would be streamlined compared to more full scale games. Everything in the game rotates around the use of special dice that are marked hit and miss, and different situations result more or less dice being rolled. It’s surprising how versatile a system that  work only in 2/6 and 4/6 chances can be when applied with a bit of imagination. Shooting, armour cover and all other mechanics function based on rolling hits or misses (as appropriate).

Clearly this would be a fast paced game and I can anticipate that there could be a lot of carnage, with units potentially being wiped out in a single round of firing. With a simple fast paced game like this it’s also good that you can include additional forces to what you get in the box. Each unit has it’s own stat card so keeping track of what they can do should be fairly easy and intuitive.

The special rules for different kinds of units and weapons helps differentiate the units without over-complicating anything and I like that units have a nice mix of weapons, including limited use kit like one use anti-tank grenades. I also like that this game has rules for ‘hero’ models which can join units and enhance them as well as use their own considerable abilities.

The Dust universe, with its sci-fi alternative universe take on World War 2 is an intriguing one. And I think this board game could be a very enjoyable introduction to this universe, and indeed to miniatures gaming in general, as players can buy any combination of the additional unit boxes and then potentially branch out to play the full-on wargame version Dust Warfare.

Hope this brief review was interesting. Anyone with actual experience of playing Dust, might like to give us the benefit of their insight.

Posted by Chris in Uncategorized on October 3, 2011

Amongst the various games that caught my eye recently during my perusing of the manifold options offered by the world of Wargaming is Dust Warfare, by Fantasy Flight Games. 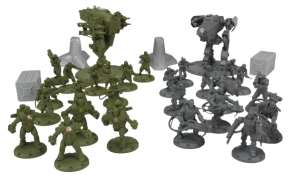 Dust Warfare is a tabletop-based  evolution of the Dust Tactics boardgame that is now in it’s second edition. Both are set in a re-imagined sci-fi version of World War Two in which the Axis and Allies continue their struggle with the aid of lasers, giants walkers, jet packs and gorillas. 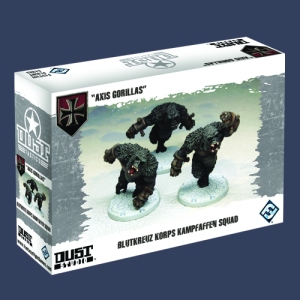 I’ve never been one for historical gaming. Maybe it doesn’t offer the sheer escapism that fantasy of sci-fi gaming offers, maybe it’s the feeling that you are constrained by the real events of the vague sense of it been perhaps a bit disrespectful. It doesn’t help that historical wargamers are stereotyped as the sort of people who will sneer at you for painting the bootstraps on your model the wrong shade of brown.  This can go double for games set during the Second World War as the events are relatively recent in the public consciousness (certainly compared to say the Napoleonic wars) and I imagine more than a few wargamers must feel a vague pang of discomfort about the idea of taking on the role of Nazi Germany or Fascist Italy, (or Stalinist Russia for that matter).

Dust Tactics/Dust Warfare subverts a lot of these problems by making it very much an alternative universe version of WW2, much like Dystopian Wars and other steampunk games give us an alternative universe version of the Victorian era. The infusion of a vast amount of discovered alien technology breaks the world of Dust away from the real events quite nicely. It also helps that the two sides are the somewhat generic Axis and Allies factions rather than picking out the specific nations from those two sides.

It’s difficult to carry of an idea like this without a sense of humour. Fortunately I think the people at  FFG do have one, with the inclusion of the Axis War Gorillas being just one example. Unit names such as ‘BBQ Squad’  and ‘Laser Grenadiers’ show that this is a game that is not taking itself too seriously. Of course, FFG didn’t invent the idea of re-imagining WW2 with shiny sci-fi bits and there’s a rich genre out there to ‘borrow’ ideas from. The recent Captain America film is just one example of our society’s fascination with the idea of raygun Nazis and jetpack Allies (and which perhaps helped Dust capture my attention so soon after seeing it). West Wind Games’ Secrets of the Third Reich is another take on this idea.

All the signs are that the two games will be compatible, which suggests that players will have the chance to get the hang of things playing the Tactics starter box before committing themselves fully. Plus the option of playing ‘big’ and ‘small’ versions of a game is a welcome one when so many gamers are often pushed for time/money/space/etc.

The miniatures seem to be of pretty good quality and some of the designs, such as the assorted walkers and units like the Allied ‘Grim Reapers are extremely good looking models. 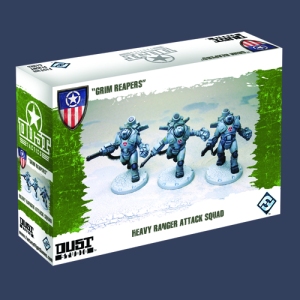 FFG have a reasonably good reputation as a producer of boardgames, RPGs and card games and have been granted the licence to produce games based on a wide variety of IP from films, books, TV etc. The most recent example would be FFG recently acquiring the Star Wars licence and announcing an X-Wing miniatures game, but they also produce games based on Lord of the Rings, Battlestar Galactica, Game of Thrones, and Starcraft. Not to mention the RPGs and boardgames based on GW IP such as Black Crusade or Horus Hersy. Say what you like about GW I doubt they would licence their IP to just anyone. FFG clearly have form, and the fact that veteran games designer and ex-GW alumnus Andy Chambers is designing the Dust Warfare rules is another sign that this could be a really good game. 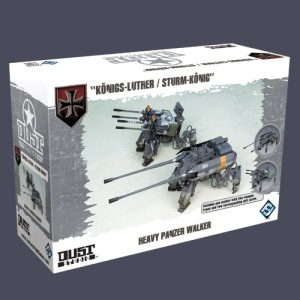 I’m not sure that I’ll have the chance to give Dust a try, being rather too busy with other projects, but I think credit is due to FFG for creating a genuinely interesting and appealing project, that was only narrowly edged out by Warmachine as a game I would have liked to try. 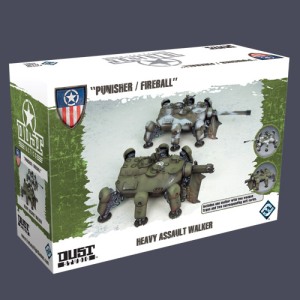