Crushing All Before Them

Posted by Chris in Uncategorized on November 19, 2011

Spartan Games have released preview renders of some of their upcoming mobile airbases for Dystopian Wars.

The Kingdom of Britania Brunel is quite a cool and imposing model. The St Paul’s-esque dome underlines the quirky steampunk nature of the Dystopian Wars world. Coupled with the pleasingly chunky track units and the rather cool forward cannon battery it’s quite powerful looking. I am intrigued by the ironwork on the hanger roof. I cant help but wonder how it might look painted up as stained glass.

The Empire of the Blazing Sun Kagoshima is certainly characterful. I think I like it less than the other two previewed so far, mainly because the legs look a bit stumpy and ponderous and I can’t help but envisage it shuffling along rather than striding purposefully. Someone more knowledgeable than I about Japanese culture will have to comment on how appropriate the temple-like structure is.

The Alamo for the Federated States of America is perhaps my favourite of the three previewed so far. It’s much more utilitarian compared to the more stately Brunel and Kagoshima. I like the banks of triple mortars at the front and the omnidirectional rocket battery. For some reason the enlarged tread wheels at the front make me think of dragsters.

Let’s stay tuned for the Prussian and Covenant of Antarctica mobile airbases which no doubt will be previewed in the next week or so.

Posted by Chris in Uncategorized on October 30, 2011

This week for Miniature Monday I have been able to paint up a Vanguard-class submarine for Dystopian Wars.

I used my standard black/gunmetal hull with red and white details and bronze for the pipes. I quite enjoyed painting the waterline base. It was done with Regal Blue, shaded with Asurman Blue wash, then highlighted with Enchanted Blue, Ice Blue and finally Skull White.

So far, I have one surfaced version and one submerged done. I also have more Britanian cruisers in progress as well as Aquan heavy cruisers for Firestorm Armada. Hopefully I will be able to show you them next week.

Posted by Chris in Uncategorized on October 10, 2011

Another Miniature Monday has rolled round and I’m pleased to be able to report that on this occasion I have something to show you all.

This week’s completed project is the Britanian Majesty-class Dreadnought for Dystopian Wars:

Painting this ship, I followed the same colour scheme I have been using for the other ships I have painted for this fleet. I’m quite happy with how the red and white trim contrasts with the black/gunmetal hull. I’m also quite pleased with how well the bronze I used to pick out the ram in the prow came out.

Here is a picture of the Dreadnought with my Ruler-class Battleship, which I don’t think I’ve had the chance to show off on the blog either: 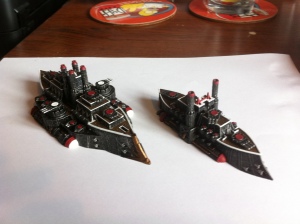 And in turn, the Battleship with the cruiser that was the first ship I painted up for the Britanians: 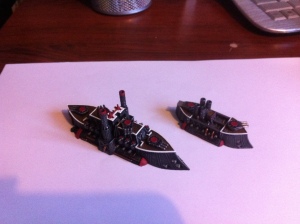 The next project for the Britanians will be to finish of the cruiser’s squadron mates. After that the time has probably come to look at the Frigates and Destroyers.

On Her Majesty’s Naval Service

Posted by Chris in Uncategorized on August 16, 2011

As some of you reading may know, I recently got into Dystopian Wars, the steampunk naval wargame produced by Spartan Games.

I’m not usually interested in ‘historical’ wargames, but DW caught my imagination with it’s inventive alternative universe take on the Victorian area and it’s cool steampunk elements. The steampunk elements adding that little bit of sci-fi spice to excite my interest. The fact that the models are absolutely fantastic (while being relatively inexpensive by wargaming minature standards) was just a bonus.

It took me a while to decide which of the four nations that were available at the time. I was tempted by the sleek lines of the Prussian Empire ships and the quirkyness of the Empire of the Blazing Sun – most especially the Bond villain-esque Tenkei Sky Fortress. I initially had my doubts about the Kingdom of Britania, most especially because I felt the model for the Avenger Fleet Carrier wasn’t a very good implementation of the ‘two hulls’ concept. But as I saw other models in the range such as the Majesty Class Dreadnought, Ruler Class Battleship and the especially cool Vanguard Class Submarine I was won over. I also started to appreciate the sheer firepower of the Britanians, not the most subtle of fleets perhaps, but ore than able to bring the noise against enemies.

My first attempt at painting a Britanian model was, to be perfectly honest, a bit of a disaster. I promptly destroyed all evidence of the woefully thought out colour scheme by plunging the model in question into a vat of dettol.

Searching for inspiration for a new colour scheme – and determined to avoid anything too grey to prevent clashing with my Aquans for Firestorm Armada – I found myself looking at a Wikipedia photo of HMS Warrior:

The combination of black, red and white really appealed to me and it struck me that this could form the basis of a striking, but also quite simple colour scheme.

My first ship painted in this scheme was completed on Sunday night, just in time for the all important #MiniatureMonday on Twitter:

I’m quite pleased with now the black, highlighted with gunmetal makes the hull look suitably weathered and also emphasises the heavy construction and the blunt-instrument nature of the designs.

So, this was the first of what I hope will be a very successful fleet. I have a big pile of ships waiting to be painted and I think this colour scheme will let me paint up a really good looking fleet in not much time.

In the meantime however, all ahead and damn the torpedoes!